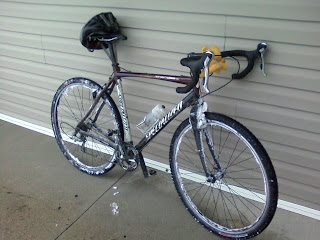 On Saturday Luke, Phil and I rode a customized version of Nick's gravel road ride. I know Luke is in the process of putting a proper write-up w/ photos on http://www.blogger.com/www.team-virtus.com so I'll keep this short.

We met at Dos Primos at 6am and started the ride on frozen trails. The weather was fantastic, (very little wind), and there was a lot of pretty scenery along the way. About 13 (?) miles into the ride we found an abandoned puppy. He seemed to be a pretty healthy guy, but was very much freezing his ass off. So we dumped out Luke's pack and wriggled him into it. Phil was planning on turning around anyway, so he transported the pooch home while Luke and I rode on.
At around the 35-40 mile mark things got pretty wet and sloppy. The gravel roads were pretty much mud roads laden with slush-filled potholes. It was pretty brutal. When we got to the Katy Trail is was completely fucked so we followed Hwy 94 a little bit until we found a suitable detour.
I guess I should probably admit that I got mildly lost and rode an extra 5 miles.

I think Luke and I were both surprised at how good we felt when we were done. Maybe it was the awesomeness of the route or the scenery, I don't know, but I wasn't feeling much pain at all until about the 40 mile mark.
We had a great ride on a great day, and the Dos Primos JUMBO margarita I had afterwards gave me the lazy eye in record time. 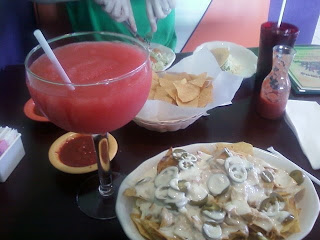 I think Luke was pretty happy with his meal as well.
Cyclometer reading at the end of the ride showed 59.14 miles and 4hrs 44mins of riding time. I think that comes out to an average speed a little bit better than 12mph. Not good, but it's a starting point. This was only my 2nd ride using a computer, so I really don't even know what a good "goal" average speed would be. 15 maybe?
Here's the overview of our ride that I've tried to send to Luke 5 times but the link doesn't work. I've got a few more pics but for some reason I can't get them to load. I got pics of Luke's food, our muddy bikes, etc..but they won't upload. FML. I really need to get my own pc.
Posted by ~Bob at 10:45 AM